For a brief change of pace lets have a look at what is going on in the world of Outpost Recon. As a fairly simple runner/shooter style game the last thing it really needs is rich world lore and a deep storyline. But there is at least some backstory to what is happening in the world and context to the actions of the players and other factions.

What is going on? The peaceful research and agricultural colony of Vestia Prime is under attack by a newly emerged alien force. The alien’s vastly more powerful airborne forces have totally destroyed the colony’s space port and swarm on any ships trying to depart or arrive. Vestia Prime itself is protected by a huge energy field but the smaller outposts and bases scattered around have been completely cut off and many wiped out entirely. Unprepared for combat on this scale, they have no way of fighting back.

What will they do? The various research labs and manufacturing industries of the colony have pooled their efforts to put together makeshift land vehicles which seem to stay somewhat under the alien’s radar. Relying on their speed, these Recon Rovers must race across the terrain to try and find clues on what is happening. Everything from mining lasers, space ship thrusters and advanced chemical systems are being adapted in to new prototype weaponry systems to try and arm the Rovers against the aliens.

As players play through the levels they will be recovering a variety of datalogs, communications, research results and other data from the outposts. For players interested in learning more about the world you’ll be able to read these between missions and piece together the full story of what is going on!

I’m a big fan of a short, punchy intro sequences at the start of levels and I wanted to have something along those lines in Outpost Recon. Some great examples in other games include the first levels from all the R-Type games, the flashy title cards of Sonic the Hedgehog and Ristar or the take off sequence from Afterburner. They’re a great opportunity to get a closer look at your vehicle, give your location some context and set the pace for the level.

For Outpost Recon every level involves driving between the different outposts that are scattered around the planet. To make this more apparent in the actual game I decided it’d be neat to show the Rover getting up to speed along an access tunnel and then launching out the side in to the world.

For a first attempt I think it came together pretty well! There’s a lot of areas I can see to improve it (the text spacing is already clawing at my soul) and it could probably do with being shorter. This clip is also a nice chance to see the new rigging in action as the Rover lands on the ground. I could watch that suspension bounce all day. 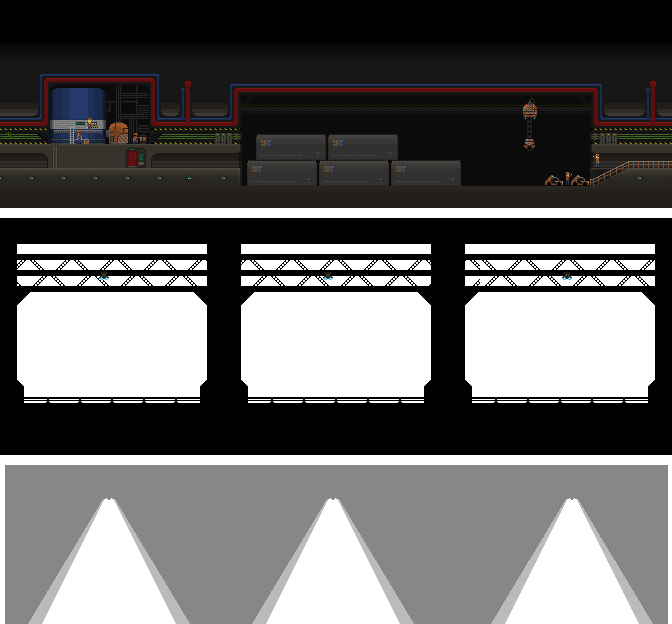 In the background of the tunnels there are all kinds of things going on. Utility vehicles, people working and repairing things, cargo areas, fluid tanks, furnaces, etc. There’ll be more work done on them at some point. In total there are currently 6 different outpost interior sections that will be called at random to complete the launch tunnels so it’s not exactly the same every time. The interior sections are each made up of three layers, the background, the foreground and a partially transparent shading layer to give the impression of light beams. I plan on spreading out these layers along the z-axis more to give a better impression of depth.

Now with the much sharper Rover assets ready the terrain needed to be revisited as well. This mainly involved simply smoothing out the top of the graphics after upscaling them and refining the edge collision points. The edge collisions were also significantly reduced in complexity and smoothed out as some of the more accurate to sprite collision edges would sometimes catch the Rover in weird ways.

This was also the perfect time to add in an entirely new terrain set that had been in my planning from the start: Highways.

Each highway section of terrain is actually two individual sprites. The colored highway ramp and a plain white ground section underneath. This allows me to continue recoloring the ground section in Unity while not affecting the grey highways. In theory I’d also be able to smoothly fade between colors for neat area transitions.

The highways serve a number of purposes. They make sense in the game world as you are driving between established bases. They provide lots of opportunities for hazards as they have been heavy damaged with the alien attacks. Driving on the highway also increases your speed giving them a slightly faster paced feel.

The parallax background layers also got a bit of a touch up. They were already in a higher resolution than the foreground elements so they only needed to be cleaned up and given a bit of depth. I’ll definitely be coming back to work on these more later.