With the base weapon system functioning it was time to make something to actually shoot at. A nagging voice in the back of my mind kept telling me to simply make some plain squares or circles for testing, but where is the fun in that?

I already had some idea of what the enemies in the game would be like. An entirely organic hive species with many different castes to fill different roles. The basic worker unit would be your most common enemy and would come in small swarms akin to grouped pathing enemies in side scrolling shooters.

For a quick point of reference I also want to show what the first draft of base enemies looked like in the original low resolution pixel art style. They were one of the sprites that started making me think that I needed a bit more resolution. Also they look way too much like lanky metroids. This design was from when I was leaning away from more traditional side scrolling shooter style enemy patterns. The ‘floaters’ would make their way around the screen in semi random patterns. 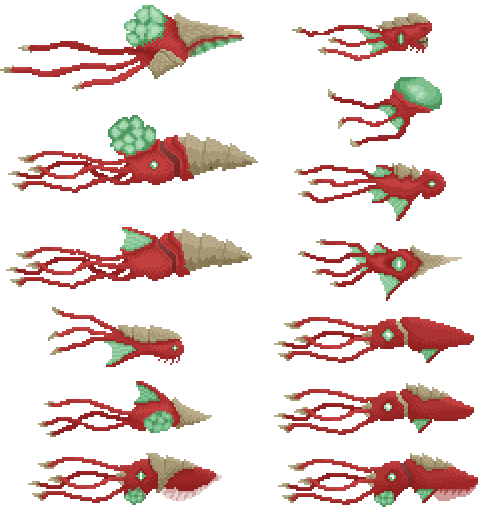 I knew I wanted enemies to have a somewhat aquatic nature to them and the shift from the jelly fish like ‘floaters’ in to ‘squids’ for more predetermined enemy paths seemed like a logical step. Above are a collection of the original concept designs I was playing around with.

As you can see from the lower concept designs I started leaning heavily towards one style. In the end my solution was to do a bit of each of them. The enemies could be spawned in via the Sewing Machine while giving various ‘mutations’ to individual members of that swarm. So some could have heavier armor, projectile capabilities, ramming AI, etc. Some cheaty recoloring and zone based variables to change speed or health could also help to mix up the gameplay somewhat.

Now to get them in the game. I decided for testing I would give them a very basic movement logic that would cycle between short bursts of movement towards or away from the player (while still staying on screen) followed by a pause. This wasn’t at all how I expected them to behave in the final game but it would be handy for testing aiming. As a final touch I made it so they’d lock on to the player after a set number of cycles and fly directly in to them.

← Tools of the trade Weapons Testing →